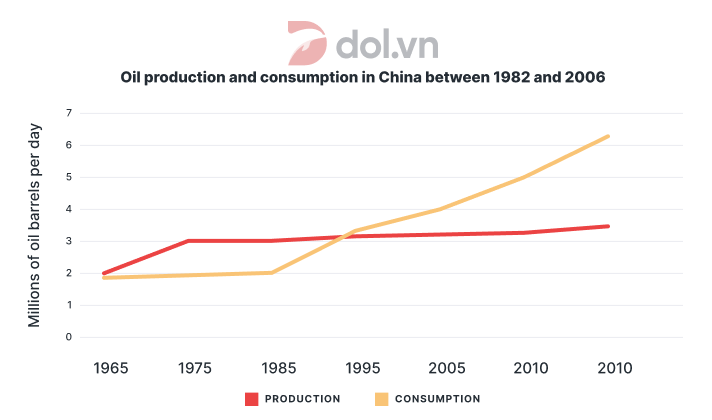 Idea 2
Production remained stagnant, and escalated to 3.5 million barrels in the same year

the oil production and usage
between 1982 and 2006. Overall, one can see that while production increased slightly,
consumption
since the 1990s have
experienced a noticeable increase
.

In 1982, the amount of oil production and consumption in China were almost

expand greatly
, reaching more than 6 million barrels a day by 2006. On the other hand, production remained stagnant, and had only
escalated to 3.5 million barrels
by the same year.

If a figure stays at the same level over a period of time, we can say that it

If consumption of a product

, it means there are more people consuming it.

If the figure for A exceeds that of B, we can say that A

If a category experiences

, the figure for that category rose sharply.
💡 Gợi ý

=> The line group demonstrates the

=> Production remained stagnant, and had only

3.5 million barrels in the same year.