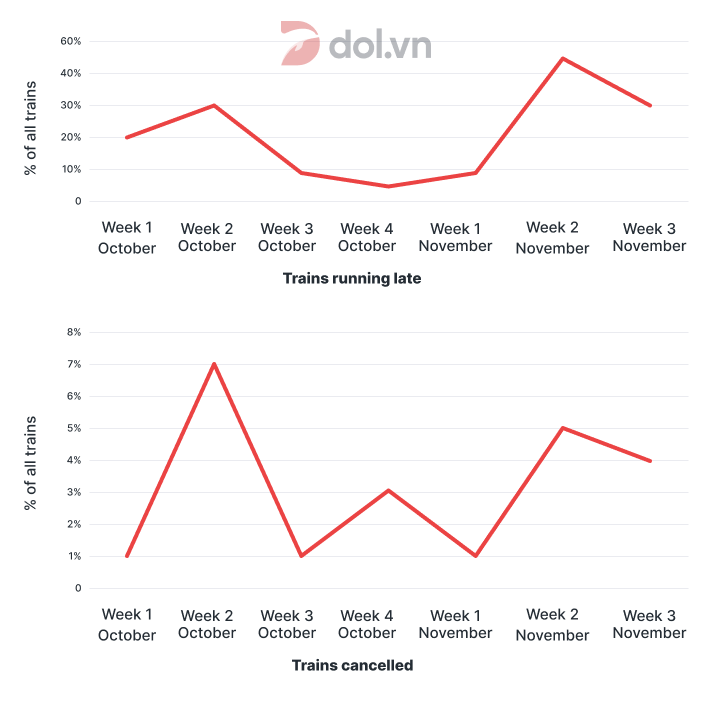 The infographics shed light on the percentages of trains cancelled or running late between October and November 2008.

Generally, it can be seen that both the numbers of trains running late or cancelled

experienced fluctuations from year to year
. Further, they both increased between the first and second weeks of October and November.

During the first week of October, one fifth of trains were

behind schedule
, which rose to 30% by the second week.
Over the next fortnight
, train services were
more punctual
, as by week 4 of October, only 5% were
overdue
. However, starting in November, the number of late trains were again rising,
reaching a peak of 55%
by the second week, before
dropping back down to 40%
by the end of the recorded period.

With regards to train cancelled, the highest percentage of this happening occurred within the second week of October, when 7% of all trains were

terminated
. This would fall greatly over the next week, down to only 1 percent. The last week of October witnessed a spike in trains cancelled at 3% of services, before declining again to 1%. In the second week of November, trains were again
aborted
at a more frequent rate, at 5%, before
plunging to 4%
by the following week.

Shed light on something
/ʃɛd laɪt ɒn ˈsʌmθɪŋ/
(verb). Cho thấy điều gì đó
A quiz can help shed light on the methods you prefer.
Experience fluctuations from year to year
/ɪksˈpɪərɪəns ˌflʌktjʊˈeɪʃənz frɒm jɪə tuː jɪə/
(verb). Trải qua biến động từ năm này sang năm khác
Across the three years, unemployment rate has experienced fluctuations from year to year.
To be behind schedule
/tuː biː bɪˈhaɪnd ˈʃɛdjuːl/
(adj). Đến trễ
You need to hurry up otherwise you will be behind schedule.
Over the next fortnight
/ˈəʊvə ðə nɛkst ˈfɔːtnaɪt/
(adv). Trong hai tuần tới
We received a letter every fortnight.
Be more punctual
/biː mɔː ˈpʌŋktjʊəl/
(adj). Đúng giờ hơn
You should be more punctual when going to work.
To be overdue
/tuː biː ˌəʊvəˈdjuː/
(adj). Bị trễ, quá hạn
My library books are a week overdue.
Reach a peak of 55%
/riːʧ ə piːk ɒv 55%/
(verb). Đạt mốc cao nhất ở 55%
The figure for China topped the list in 2013 when it reached a peak of 40 million.
Drop back down to 40%
/drɒp bæk daʊn tuː 40%/
(verb). Giảm trở lại 40% (sau khi tăng lên)
After rising to well above 50%, the figure dropped back down to 40%.
To be terminated
/tuː biː ˈtɜːmɪneɪtɪd/
(verb). Bị hủy
John has been terminated by his boss due to underperformance.
Witness a spike in something
/ˈwɪtnɪs ə spaɪk ɪn treɪnz ˈkænsəld/
(verb). Có sự gia tăng mạnh ở khía cạnh nào đó
Cinema theatres witnessed a spike in sales after the quarantine.
To be aborted
/tuː biː əˈbɔːtɪd/
(verb). Bị hủy
The aborted water park is now a rumored haunted destination.
Plunge to 4%
/plʌnʤ tuː 4%/
(verb). Giảm xuống 4%
The figure plunged to a low of 5% in 2011.

=> The figure for A reached

The figure for A dropped to 4%.

=> This month's sales witnessed a

the methods you prefer.

=> You need to hurry up otherwise you will be

when going to work.

are a week overdue

has been terminated by his boss