Table: The number of cars made in three countries - IELTS Writing 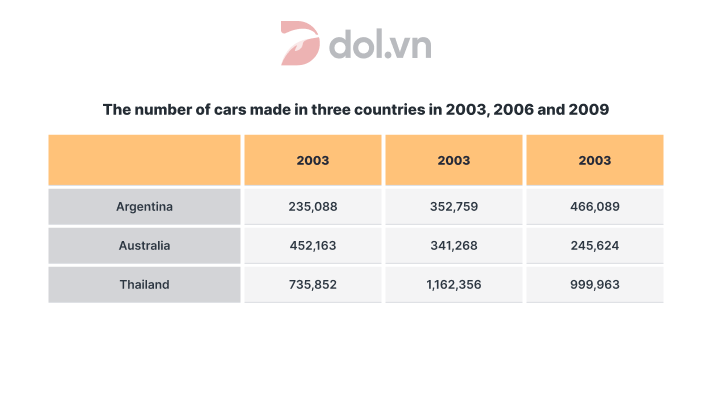 Idea 2
Whilst Australia saw a dramatic drop in its number of cars produced, the figure for Argentina witnessed the most impressive jump

illustrates
the
car production
in three countries namely Argentina, Australia and Thailand between 2003 and 2009.

Looking at the graph from an overall perspective, it is clear that Thailand

topped the list
of three given car manufacturers. Whilst Australia saw a dramatic drop in its number of cars produced, the figure for Argentina
witnessed the most impressive jump
.

manufactured
in Argentina, which was far behind in comparison to the figures for its Thailand counterpart, standing at 735,852. Three years later, car production in Argentina and Thailand
surged to 352,759
and 1,162,356. The former still grew noticeably to reach a high of 466,089 in 2009, doubling that in 2003. Meanwhile, the latter
ceased to climb
and
recorded a mild fall
of more than 100 at the end of
the surveyed period
.

Regarding Australia’s figure, it started moderately at second place with 452,163 cars produced in 2003. The number

06.
the most impressive jump

'Plastic bags and plastic bottles are killing the environment, with the former taking 20 years to decompose while the latter require a minimum of 450 years.'

Which is the synonym for 'manufacture'?

Which is the synonym for 'illustrate'?