The bar chart below shows the number of houses built per year in two cities, Derby and Nottingham, between 2000 and 2009. 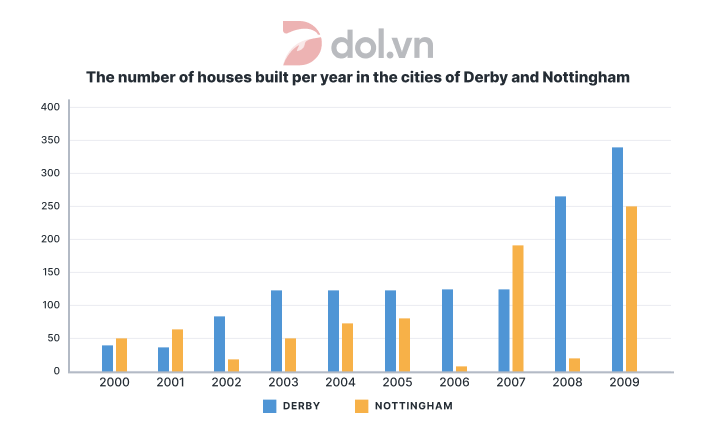 Insert Paragraph Title Here...
Intro:
Topic Sentence
Overview
Idea 1
There has generally been a rise in the rate of house construction in both cities

the number of houses built yearly
in the cities Derby and Nottingham between the years 2000 and 2009. The data shows that there has generally been
a rise in the rate of house construction
in both cities, with Derby finally building more houses in the final year.

established
in Nottingham, while 45 were built in Derby. In 2002, around 70 new houses
were constructed
in Derby, much higher than the figure for Nottingham. In fact, Derby continued to
exceed Nottingham in the number of new homes built
, up until 2007. In this year, Nottingham built 195
new abodes
, around 65 more than that of Derby.
Nonetheless
,
in the subsequent years
, Derby once again
outstripped
Nottingham in its
annual rate of home construction
: in 2008, it built around 275 houses, compared to Nottingham’s
measly
20, and in the final recorded year, Derby built around 345 houses, much more than Nottingham’s 250 fresh estates.

If Sally has a

01.
amount of money, it means she doesn't have much money.

If the figure for A

04.
a company means to create and put it into operation.

A synonym of 'however' is

=> The data shows that there has generally been

a rise in the rate of house construction

in the subsequent years