Table: The average weekly salaries of men and of women - IELTS Writing

The table below shows the average weekly salaries of men and of women working in different occupations. 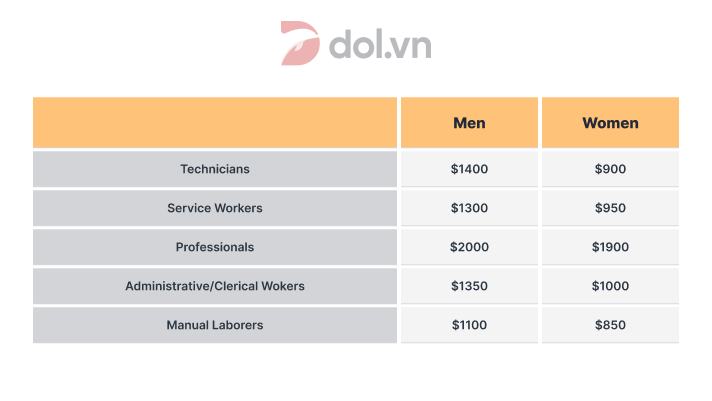 Insert Paragraph Title Here...
﻿
Topic Sentence
Overview
Idea 1
There is a wide discrepancy among men and women working in the same position regardless of occupations

illustrates
the data on the difference of
average weekly salaries
among
male and female workers
in
various professions
in 2015.

Overall, what stands out from the table is that there is

a wide discrepancy
among men and women working in the same position
regardless of occupations
. However, the gap is
less pronounced
when it comes to
professionals
.

Despite working in the same positions, male workers were always paid 100 to 500 dollars higher than their female counterparts. The most apparent discrepancy can be seen in

technician
positions where men were offered 1400 dollars weekly compared to 900 dollars for women. The same picture can be seen in
service workers
with males earning 1300 dollars per week, 350 dollars higher than females. Similarly, male
administrative/clerical workers
and
manual laborers
received 1350 and 1100 dollars as weekly salary, whereas female
counterparts
were only paid 1000 and 850 dollars.

weekly earnings
of men in professional employment were still 100 dollar higher than the figure for women.

in the number of male and female workers in this company.

stood out from others