The picture below shows the use of renewable energy accounting the total energy from 1971 to 2006. 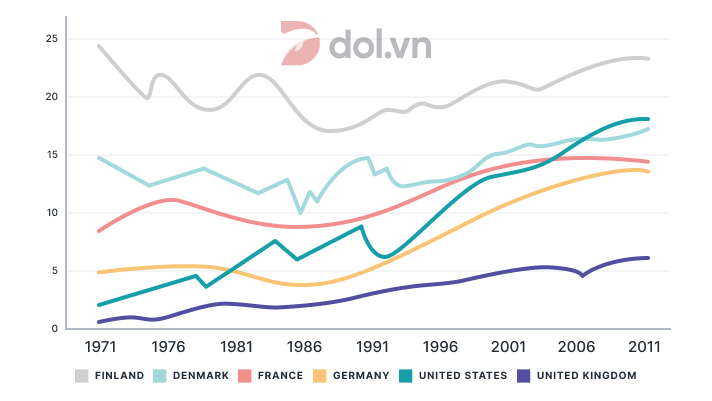 Idea 2
Finland topped the list throughout the period despite a mild drop towards the end of the period.

Idea 4
France, Germany and the UK

depicts
the rise and fall of
renewable energy use
in six
developed nations
spanning 40 years between 1971 and 2011.

Overall, what stands out from the graph is that

five out of six countries
showed an increased use of renewable energy over the time. Finland topped the list throughout the period despite
a mild drop
towards the end of the period.

headed the list
of renewable energy use among six countries with almost 25%. Next came Denmark with 15% and France with 6% of total energy consumption. Germany, the United States and the United Kingdom were at the bottom, varying from 5% to less than zero respectively.

With respect to the figure for Finland, it evidently

followed an erratic trend
with a low of
roughly
16% between 1986 and 1991 before recovering to 23% in 2011. Being even more erratic, the proportion of renewable energy use in Denmark
fluctuated widely in an upward trend
to reach a high of 17%. At the same time, despite starting low close to zero, the
consumption
of renewable power in the United States skyrocketed to 18% in 2011. Meanwhile, this source of energy also saw a rise in its share in France, Germany and the United Kingdom, constituting approximately 15%, 13% and a negligible 6% at the end of the period.

What does the phrase 'with respect to something' mean?

to worry about something

as opposed to something

Which is the synonym for 'roughly'?

Which of these countries is a developed country?

Which is the synonym for 'depict'?

What does 'to stand out from something' mean?