The table shows the export values of various products in 2009 and 2010. 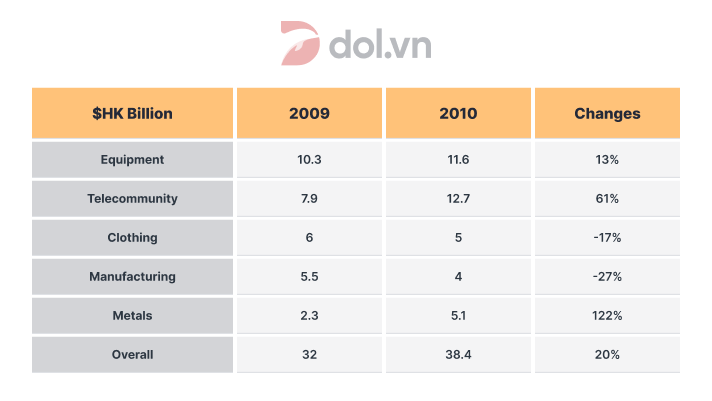 Overall, what stands out from the table is that there were

upward trends
in the export values except for two
categories
namely clothing and manufacturing. To be more specific, in 2010,
telecommunity
earnings
outdistanced
that of equipment to rank first on the list while metals export values saw the most striking jump.

overall income
from export recorded growth from 32 to 38.4 billion dollars. In 2009, equipment export values
topped the table
(10.3 billion), followed by telecommunity (7.9 billion). A year later, whilst the former
witnessed a marginal rise
in its earnings to 11.6 billion, there was
a surge to 12.7 billion
in the figure for the latter, registering for a 61% increase. A much more noticeable increase of 122% can be seen in the sales of metals as it
skyrocketed to 5.1 billion
in 2010, doubling year-on-year.

With respect to less

Which is the synonym for 'consecutive'?

Which is the correct spelling for 'Tiền kiếm được/thu nhập'?

Which is the synonym for 'pronounced'?

Which is the synonym for 'outdistance'?

Which is the correct expression for 'Nổi bật so với cái gì đó'?